As valuers of property all over the United Kingdom, our experience in the last 12 – 24 months is that reconstruction costs within Prime Central London, as defined by the postcodes below, far exceeds any published data.

This paper is intended to alert underwriters, brokers, managing agents and property owners to possible underinsurance that will be sitting within these locations.

The increase in market values in PCL is widely acknowledged with comments being used such as ‘the market’s gone crazy’, ‘prices are rocketing etc.’. There has been a lot of comment in the press with regard to the purchase of property within PCL being seen as a safe haven for foreign investors during the last few years. All brokers/ underwriters will recognise owners of property and homes in these locations fitting that profile.

Knight Frank has been tracking this since 1976 and although the trend in 2013 has been slower than some previous years, growth over the last 3 years has far outstripped that in other parts of the country.

Although it still remains the case that there is no correlation between market value and rebuild costs/the building sum insured, it stands to reason that a contractor working in a home that has just cost £15,000,000 to purchase – or indeed £1,000,000 – is not going to charge £50 to fix a dripping tap.

The cost of employing reputable contractors in these locations has increased. The market values have increased far beyond any indexing applied to an insurance policy and, while again we would not want to make any firm correlation between market and insurance value, one does need to dig a bit deeper as to what is going on on the ground.

The profile of the client has to be considered. The process required to create a perfect and flawless finish and the expected ‘scope creep’ of a design scheme, does take longer to achieve and inevitably contractors price this into their fees.

Scope creep and technology in buildings. 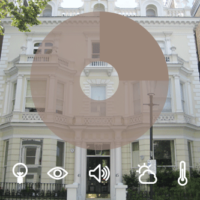 The technology found in such buildings is also increasing. It is not uncommon for a quarter of the sum insured to be taken up by lighting, heating, air conditioning, audio/visual installations etc. It is worth noting that in a standard office building, the inclusion of full air-conditioning (a must have in some quarters now) can add 20% to the rebuild cost.

We have assessed flats where clients have paid £8,000 per m² of floor area just for the internal fit out. There are also cases where a simple refurbishment of a PCL townhouse in a very sedate – one may even say ‘ordinary’ HNW scheme – has cost £7,000 per m². Internal fit outs of some commercial spaces – again with a fairly calm, simple scheme – have come in at £11,000 per m².

One BCH client reports spending £5,000,000 on a reception hall/ lobby scheme. Anecdotally there seems to be an element of “keeping up with the Joneses” with clients wanting to outspend their competitors or neighbours.

Carrying out a rebuild in a very tight/compact location and managing a project around restricted working practices and hours enforced by local authorities and planning bodies, also have a severe impact on the amount charged and the length projects take to complete. While some of the above may seem not to be relevant to insurance, there is an assumption that insurers have deep pockets and that claims are simply ‘expensive’ and the cost of the unexpected seems to have become the norm.

Re-valuation of buildings – the most prudent response.

Attention is drawn to the need to re-assess the base sum insured on a regular basis. Good practice advises that this is dealt with by way of a desktop update on an annual basis, with a full re-assessment undertaken in every third year. A full assessment also needs to be prepared in the event of substantial alterations being undertaken to the property.

Royal Institute of Chartered Surveyors
The above is the official guidance given on this matter by the RICS. However, very very few organisations carry out an annual review or even a three year review. Most owners and organisations leave it for at least five years. It is our opinion that for properties in PCL, the desktop update for those assessed during 2012 and those assessed on the basis of a site visit during 2010 or before should now be marked as an URGENT PRIORITY.

Taking all this into consideration, BCH has revisited its view on costs within the PCL postcodes and is now adding significant contingency to reflect the increased costs compared to other parts of the UK. We would urge that desktop updates or full revisits be requested (depending on the date of the original assessment) to take into account what we see as a key market shift. This is essential to protect not only policyholders but also insurers; especially those offering any type of guaranteed rebuild cost where effectively the sum insured is unlimited.

For help with establishing the rebuild cost of your property, please contact us on 01455 293510 or email info@bch.uk.com